Start a Wiki
Were you looking for the Alien Character that appears in Area 51 Storming Mode?

Inside the Alien Chamber

Alien is a secret character that appears in All Modes (with the exception of Storming Mode), It acts in a way similarly to that of Eyeless Jack. Finding or becoming this killer (In Killer Mode) for the first time will grant you a badge: Ultimate Secret of the Area.

Alien's appearance is similar to that of a fictional creature known as the Grey Alien. It has a small mouth that is curved slightly and doesn't seems to have a nose or hair. It has long lengthy arms with turquoise squid-like tentacles for hands. He also has no fingers or toes and has 'stumps' for feet.

Alien moves the same speed as other killers (with the exception of Sonic.exe's running ability and Slenderman's stealth ability). When Alien is close to a player he will shoot a light green neon projectile, in the game files this is referred to as 'Alien's Acid' the projectile is almost identical to that of Eyeless Jack's, however Alien's is much easier to see, does much more damage and doesn't have a long lasting effect.

Ultimate Secret of the Area

You get this badge by finding the "Ultimate Secret" of this area... Getting this badge is very hard and shows that you are one of the best player ever.

Find The Alien For the First Time.

Alien's arms do not appear to be the same color than his body. 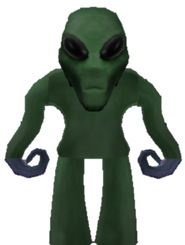 Alien Featured on the "Ultimate Secret of The Area" Badge
Add a photo to this gallery
Retrieved from "https://roblox-survive-and-kill-the-killers-in-area-51.fandom.com/wiki/Alien_(Enemy)?oldid=2989"
Community content is available under CC-BY-SA unless otherwise noted.